1894: Thirteen women met at the home of Jane Weeks to organize a reading circle and play whist.
1895: Twenty-six charter members organized the Palmetto Club in response to the Women’s Club Movement then sweeping the country. The Club motto was chosen, “Why Stay We On Earth Unless To Grow”. Green and Gold were selected as club colors and the Palmetto leaf was chosen for the club emblem.
1896: The Club federated with the Florida Federation of Women’s Clubs and the General Federation of Women’s Clubs.
1917: The Club paid for the Public Recreation Director, the start of the present City Recreation Department. The Club also paid for the first City Planner and organized the League of Women Voters in Florida.
1971: The Clubhouse was destroyed by fire.​

Back to the top 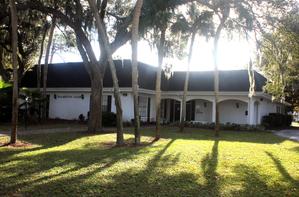 History of the Palmetto Club 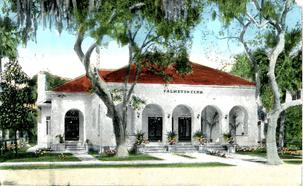 They chose “Why Stay We on Earth Unless to Grow” as the Club motto, green and gold for Club colors and the Palmetto leaf for the Club emblem. The club Federated in 1895 with FFWC and GFWC. Mrs. Mary Ruger, Palmetto Club President, accepted the honor for the Club from Mrs. Ellen Henrotin, GFWC President, for being the first club in Florida to federate with GFWC and for bringing the state into the General Federation. The original letters between Mrs. Henrotin and Mrs. Ruger are in our vault. Miss Celia Doerne suggested a motto of or the club, which was adopted and later used by the Florida Federation of Women’s Clubs, “In great things unity, in small things liberty and in all things charity.”

The club has given four presidents to the Florida Federation: Mrs. Mary Ruger, 1899; Mrs. Charles Raynor, 1907; Mrs. Nellie Stanley, 1928; and Mrs. Mildred White Wells, 1948. The club has hosted the Florida Federation five times. Early accomplishments of the club include:
• The first building in Daytona Beach to have electric lights.
• Raised funds for building a wall around City Island, which was used then as a garbage
dump, then turned it into a park.
• Rid the streets of hogs and livestock.
• Started the first free lunch program for underprivileged school children and went into
the schools and helped prepare lunches.
• Started the first live Christmas tree in the city.
• Spearheaded the YMCA and the PTA, which is a descendant of the Mother’s Club.
• In 1917, the club paid for the Public Recreation Director, the start of the present City
Recreation Department.
• Paid for the first City Planner.
• Organized the first League of Women Voters in Florida
• Organized the baby 411 Club in Florida.

Socially, the club has been known in the past for seven course formal banquets for husbands and friends, and the clubhouse has been the center for receptions for nationally known personages. In the ‘30s, the club was a teenage center for weekend cotillions which catered to the young people of the community.

On February 1, 1971, the clubhouse, which had been a community landmark for 76 years on Orange Avenue, was completely destroyed by fire. On January 9, 1972, a new $200,000 clubhouse was dedicated with a $45,000 mortgage, which was burned on October 7, 1983. The club celebrated its 100th anniversary in 1994 with a gala luncheon which was attended by its members and FFWC District 6 clubs and officers.